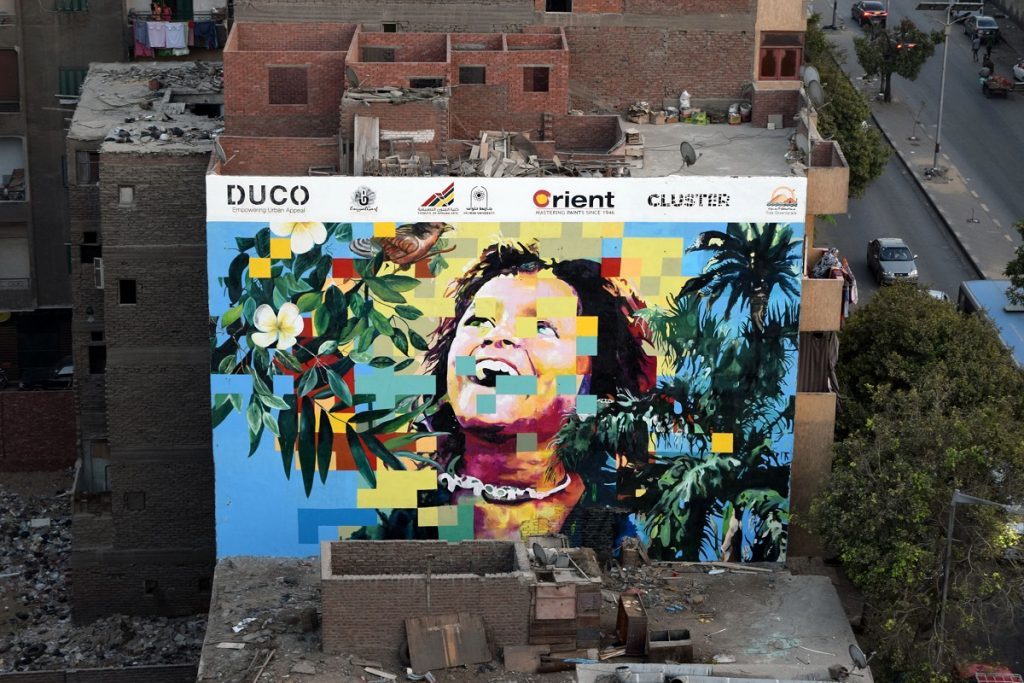 A recent release regarding a new mural in Giza, Egypt, explains, “The Participatory Development Programme (PDP) in Urban Areas is an Egyptian-German development measure implemented in cooperation between theEgyptian Ministry of Housing, Utilities and Urban Communities (MoHUUC)and the Deutsche Gesellschaft für Internationale Zusammenarbeit (GIZ)GmbH. The PDP’s Climate Change Adaptation Strategy aims to support informal settlements which aid in adapting to climate change’s future impacts. To this end, the PDP implements architectural measures aiming to support inhabitants incoming with heat-stress while reducing heat gain in buildings and public spaces. This is achieved through a set of small-scale, intuitive interventions. The project takes on an artistic and activism role in its implementation of a mural in Masaken Gezriet El Dahab, Giza Governorate (Egypt). This mural tasks itself with raising environmental awareness and encouraging the local community to take an active stance toward preserving and bettering the environment. This project is commissioned by the German Government and is co-funded by the European Union.”

Cairo-born artist Engy Al Garf led the project in collaboration with 15 members of the Faculty of Applied Arts department at Helwan University.  DUCO, an organization whose website states it is geared towards “the facilitation and promotion of public art in an urban context,” organized and produced the project. CLUSTER, a self-described “urban lab and technical project consultant,” also aided in developing the idea for the mural’s original creation, “among other architectural adaptation measures,” according to the project’s official statement. The project was sponsored by Orient Paints.

The final product blends the calculated scientific elements of climate change with its pathos, the romanticism of this chaotic, natural beauty surrounding us all.

The scientific aspect manifests through the artists’ use of pixels, which were actually “inspired by the heat sensitivity maps provided by GIZ for the neighborhood this mural inhabits,” according to the work’s official statement. This strictly quantitative portion of the piece contrasts against its more naturalistic elements, namely, the bright, smiling child’s face marveling upon the flora and fauna surrounding her. Leaves and flowers seem to spring spontaneously out of nowhere, embodying the notion that while nature does operate according to the laws it has dictated to science, it does so purely out of blind instinct. Its actions are wild and unpredictable at times. This is the source of its beauty.

Despite nature’s unruly behavior, it will still bend to overpowering variables such as those presented by humanity’s hunger for non-renewable resources. Interrupting an idyllic scene such as the one depicted here with the cold, hard facts presented by the pixels in this heat map demonstrates, “the heat build up and impact generated by humans as a result of high population densities [alongside] declining natural resources and an increased demand for energy,” Al Garf explains.

Bringing a multi-faceted mural such as this to life required a multi-faceted approach, consisting of two phases. First, a team of “skilled labor and painters” applied the pixels pertaining to the map over the course of five days. Phase two lasted nine days, and saw a team of fifteen students from Helwan’s Decoration Department assisting with the creation o the piece’s lively natural scene.

Mirroring our looming struggle to deal with the further impacts of climate change, this process required a measure of thoughtful problem-solving. The statement released relays that “one of the main challenges for the project was dealing with customized accessibility systems tailored for the project site,” which required wooden scaffolding “on top of an adjacent building to the mural surface based on maximum weight and load allowances calculated by CLUSTER.” Like the mural itself, this process also illustrates the deeply-rooted relationship of science and nature, through the way in which logic and creative expression rely on each other.

From start to finish, this latest artistic intervention in Giza has made a huge splash. Perhaps the most meaningful to this particular community was the social impact. DUCO Founder and Managing Director Hassan Ismail notes, “it was interesting to experience realizing the mural depending almost solely on girls between the female lead artist together with fine art student assistants especially in such a neighborhood typically dominant by male driven activities and characteristics. Local residents are not used to watch women at work and not familiar about such large artistic murals, they were always curious about who is behind the ‘banner’ and how much it cost. Nevertheless and at the end of the day local residents and business owners were extremely happy about the final outcome and very cooperative by all means; they asked what’s next and are looking forward to continuing with such creative and developmental works in the neighborhood.”

Since she began painting at the age of ten, Al Garf has developed a body off work comprised predominantly of portraits and “[focused] on introspective emotions and covert inner thoughts.” Her large-scale works are intentionally “abstract and fragmented,” a stylistic choice practically emphasized here with the inclusion of the heat map. This tactic “[allows] the observer to narrate his/her own perspective and create personal associations with the piece.”

Regardless of the significance each viewer draws from gazing upon this stunning new work, it is magnificent in the harmony it creates. There is a balance of logic and emotion, science and nature, age-old concepts created by a team of professional women unseen by this community in Giza. Underneath the mural, the architectural impetus that allows it to exist stands as a symbol for our society in flux, grappling with the changes bound to ravage our world. Through it all, we are at nature’s mercy, seeking only to understand the entropy through the power of science.